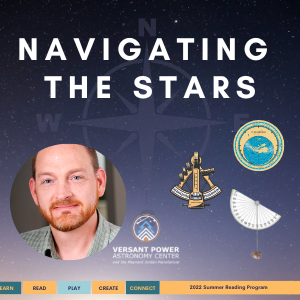 For adults and families with kids aged 8 & up.

Join Shawn Laatsch, Director of the Versant Power Astronomy Center and Jordan Planetarium as he presents how humans have learned to navigate using the sky, otherwise known as celestial navigation.  From finding their way on land or sea, determining time, and much more – the sky has been a guide for all cultures.

Learn how to determine latitude by the stars with simple tools. Registrants will be able to create a Theodolite and Planisphere to take home with them.  Instructions will be available.

Mr. Shawn Laatsch currently is the director of the Versant Power Astronomy Center and Jordan Planetarium at the University of Maine (formerly known as Emera Astronomy Center).  As a center director, he oversees all planetarium and observatory operations.  Over his 38-year career, he has presented over 10,000 planetarium shows, led educational workshops, and has been an invited guest lecturer on astronomy and planetariums in Argentina, Brazil, China, Germany, Greece, Italy, Japan, Mexico, New Zealand, and Russia. He is recognized as a pioneer in the use of digital dome technology and innovations in the field. Shawn installed the world’s first 3D stereoscopic planetarium at the ‘Imiloa Astronomy Center of Hawaii. He has consulted on the planning and building of numerous planetarium projects worldwide and recently evaluated the Iziko Planetarium in Cape Town, South Africa for its planned upgrade to digital in late 2015.

Originally from Wausau, Wisconsin he started his planetarium career at the Wausau West High School Planetarium in 1984 as a student.   While there he built telescopes and became president of the school astronomy club. Shawn has extensive planetarium experience in public, school, and university facilities.  He served as planetarium director for the Arthur Storer Planetarium in Maryland, the Gheens Science Hall & Rauch Planetarium in Kentucky, and the Imiloa Astronomy Center of Hawaii where he worked to bring new astronomical datasets into the planetarium environment.  While in Hawaii he also did a weekly radio program called Stargazer on Hawaii Public Radio His most recent position before coming to Maine in January 2016 was as director and site manager for the Infoversum, a 3D digital dome in Groningen, the Netherlands where he was recruited to supervise its construction, installation of technical equipment, and trained staff for opening the center.

In 2004, Shawn was selected as a NASA JPL Solar System Ambassador. In 2006 he was asked by NASA SEARCH to be a special presenter on cultural astronomy education at COSPAR (Committee on Space Research) in Beijing, China.   In 2008 he received the International Planetarium Society’s highest honor, the Service Award for dedication to the planetarium field. In 2010 he was elected to the Board of Directors for the Astronomical Society of the Pacific and received the Tanaguchi Award for Excellence and Innovation in Teaching from the University of Hawaii at Hilo. Shawn initiated and led the production of Two Small Pieces of Glass, a planetarium program for the International Year of Astronomy which has become one of the most distributed planetarium shows in the world. In 2011 he was appointed chair of the Mauna Kea Observatories Outreach Committee.  In 2017 he was inducted by the Wausau Public School System into their 25-Year Society as a former graduate with 25 years or more of service and significant contributions in the field of astronomy education.

Shawn has a passion for cultural and historical astronomy and sharing the wonders of the universe with people of all ages. In his free time, he enjoys the great outdoors and traveling with his wife Kim. 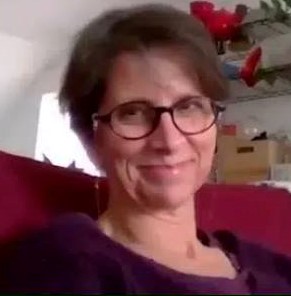